August 7, 2019/Comments Off on Your Ad Sales Rep Is Not Your Friend! 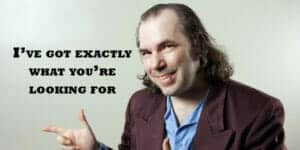 One of the most common mistakes business owners make when it comes to their advertising is thinking that their ad sales rep is their friend and that they are always looking out for their best interests. This couldn’t be further from the truth. I get it, it’s tough out there- with so many different places for companies to spend their marketing dollars, how is a business owner supposed to know where their money should be spent most effectively?

I have been an ad sales rep for numerous companies and, they’re all the same. Since I now own an ad agency and am on the other side of the table I can give you a unique inside look into the life of a sales rep and why you shouldn’t trust your ad sales rep blindly.

Now I’m not saying all ad sales reps are bad people, because they’re not. I’ve met many fine people who have are advertising reps. The problem is that I have seen smart, savvy business owners blindly take the advice of whatever ad sales rep they enjoy spending time with the most and that is a big mistake! Sure, it’s nice when the rep will get you into that sporting event that you wanted to go to, or that artist you’ve been dying to see live, but is that really worth sacrificing business? Your ad sales rep is NOT your friend, no matter how much it may seem like they are, and here are 4 reasons why:

1. They’re looking out for themselves above all else: This one may seem like common sense, but it still needs to be said. If you are advertising on a T.V. station, are they really going to recommend that you cut some of your T.V. budget and move it to billboards? Of course not! That hurts their bottom line, gets them yelled at by their sales manager for losing a sale, and risks you eventually leaving their station for other forms of advertising. That means your advertising program is most likely less effective than it could be, all because your ad sales rep doesn’t want to lose money and the business owner trusts them too much.

2. They’ll always put their companies’ best interests above yours: Business owners often overlook this one. An example of this is if a T.V. station needs to hit a certain quota for spots on a certain network but is struggling. They may pitch you on switching some of your budget to one of their smaller channels and say it’s because it is less expensive, and you will get more spots for less money. This is usually just a complete fabrication and done because they have corporate breathing down their neck about hitting their quota for that network. Advertising companies constantly “rob Peter to pay Paul” with your advertising dollars. The business owner thinks that if they don’t have to spend more money then what’s the harm in shifting some of their budget to a smaller network that their rep recommends. This can be highly detrimental to the business owner because they have moved budget from a station that was highly rated and getting good results, to one where no one is watching and essentially lighting their money on fire simply so that their ad sales rep can get an “atta boy” from their sales manager and hit a quota.

3. It’s tough out there for a sales rep: Put yourself into the shoes of a sales rep. There are more places than ever to advertise. Business owners are getting bombarded daily by different companies claiming that their company is the best and all other companies are a waste of money. Ad sales reps have a number on their head every single month, and they have to do whatever it takes to hit that number in order to keep their job. Ever gotten a call towards the end of the month where it sounded like your rep was basically on their hands and knees begging you to spend more money? More than likely, they haven’t hit their sales goals and are in danger of getting written up or potentially fired if they can’t make a few more sales before the end of the month. When this happens, reps don’t care what you buy or if it’s a good deal for you or not, they just want to hit their number and keep their job. Don’t spend additional dollars on something that may not make sense for your business just to help out your ad sales rep that you like.

4. They can show you fuzzy numbers: Statistics are funny thing in that they can be spun as positively or negatively as you’d like them to be spun. A rep can say that “we are a top local news station in the market!” and that may be true, but they could be #1 for one demographic, and be ranked dead last in another. For example, the program could be #1 for males ages 18-25, but have much worse ratings for males 26-50 or females 18-25. It’s all in the details and the spin, and a shrewd ad sales rep will be good at manipulating the numbers in whatever puts them in the most positive light. An ad sales rep isn’t going to try to create problems for themselves by showing you ratings that aren’t good for their network.

The solution? Hire an ad agency!

You’re probably thinking now, how do I know who to trust? How do I know where I should invest my hard-earned dollars if all ad sales reps are simply looking out for themselves? Those reasons are the exact reason to hire an ad agency.

First, an ad agency is objective. We get paid on a percentage of your advertising dollars spent, so it truly doesn’t matter to us where your money is spent. We will do research and find the best fit for your business based on your target demographic.

Secondly, we know all of the ad sales reps’ trick! We won’t fall for them and will call the rep out when they try to deceive us. We know what a fair rate is and when a rep is trying to price gauge you, we bring down the hammer and tell them to knock it off.

Thirdly, an ad agency is the power of multiple clients, not just one. Does an ad sales rep really want to risk ruining their relationship with an ad agency who say has 20 clients on their network, compared to a business who is a direct account? If a company tries pulling anything shady on us, we can threaten to move all of our client’s money to a competitor and that normally gets them to fall in line.

Call MPH Marketing Solutions today to schedule a FREE consultation and we can save you money and make sure you won’t get taken advantage of by an ad sales rep ever again. We are always looking out for our client’s best interests and we can help put together a well balanced advertising campaign that will help your business grow

5 Things To Avoid When Creating Your Digital Marketing Strategy

Top 5 Ways to Market Your Business Online for FREE

Is A TV Just A Device On Your Wall?